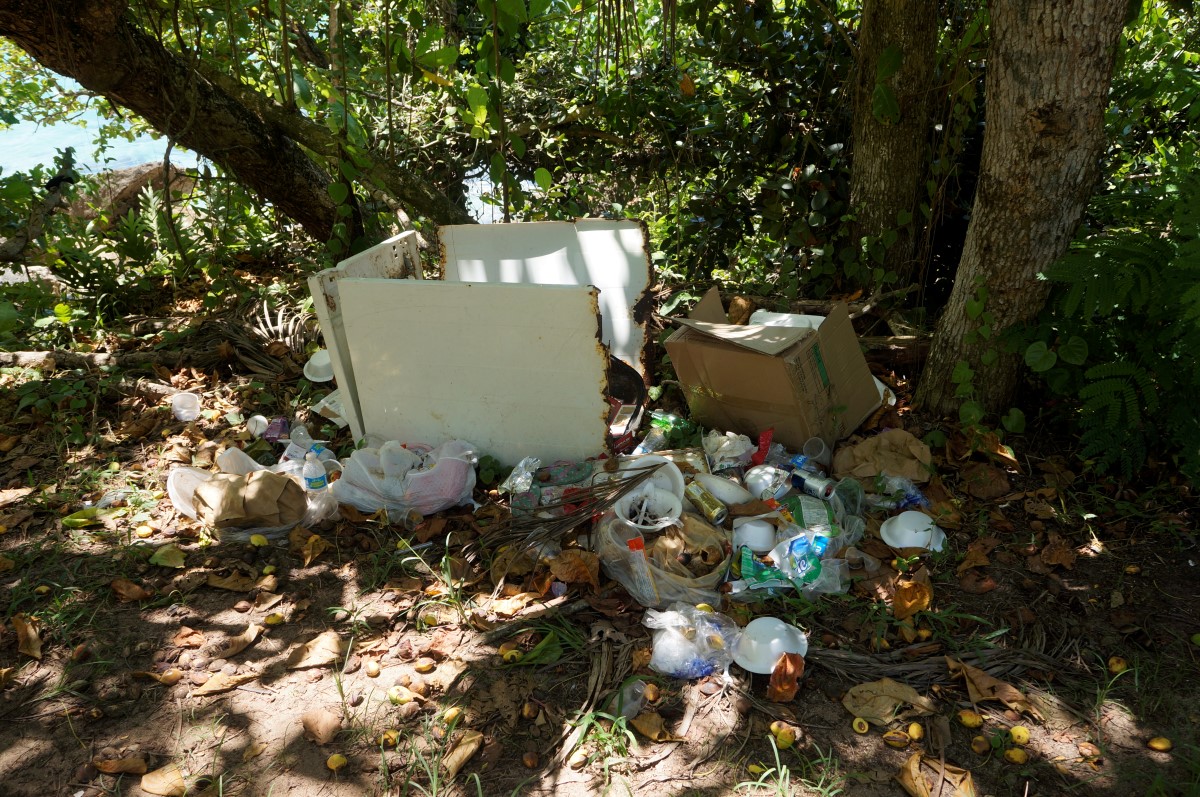 Ojo de agua, Manati, A beach that gets dirty all the time because the people want garbage cans conveniently for them everywhere even in hard to get to places like this. I cleaned what I could as I always do as I always do my one bag trash challenge. I picked up 3 bags of garbage. Seems to me that many families in Puerto Rico enjoying their beaches with garbage.

By the way This is the same beach where a promoter had a rave at last year and in which he threatened me for speaking out about all the garbage they left there. click here to read .

A family leaves more garbage and a diaper

A man who was with his family was seeing me take pictures and said that the people were pigs and proceeded to help me some, but I think that was because he probably felt guilty because it was him and his family leaving their garbage there. I took the three bags to put them into my small car which does not have much room, then left it on the side of my car so that I could enjoy the beach and later when I returned I could put them into my small car.

I returned to my car just to find that same family leaving their garbage on top of the garbage I just picked up, including a diaper. It is truly amazing how many of the families are here on this island. This is the mentality of many of the people here. I have seen it countless of times and even recorded one family for leaving their garbage, in which I got shot for. Click here to read about that.

I was so pissed off. You try to do something good and preserve this paradise and the people just want to see it destroyed because they have this mindset. This mindset of not wanting to take responsibility for nothing and having a dependency on wanting others to come clean up after them. I guess that is why many want statehood.

This family came in 3 vehicles. Any person with the right judgement and respect would have said you know what let me help this man and take a bag with me, Nope, they said let’s add on give him our trash that had food and lots of ants on it and a diaper. Oh and they even left the top of their grill and 2 gallons of water. Including more garbage down below near the ocean, including the 2 diapers on the rock, which their kids will come back to play with in the future. They also left all their cigarette butts scattered about on the sands and rocks. I wrote a post here on why the world is not an ashtray.

They bring all there garbage to the beach when it is heavy yet can’t take it out when it is light. I don’t understand that logic.

Why are most families this way?

I find that many families in Puerto Rico share this mentality. The whole family goes to the beach to celebrate a birthday or whatever, get drunk, which I think alcoholism comes into play as I wrote a blog about that here. They bring a big speaker to blast their music and leave the beaches and rivers like this. I see the families smoking cigarettes near their children, even saw one of their what appeared to be 16 years old teenage boy smoking cigarettes with them, this is the type of environment they breed for the future of this island. Yelling, screaming, teaching their kids how to hump each other to reggaeton. Not have a single care about the world and the people around them. Their children will be nothing but clones of their family. They will go on to teach their children this type of mentality and thus we have the dwindling of a generation.

Furthermore, I think this is the mentality that needs to change. I strongly feel this mentality is bred partly because of lack of education, which breeds ignorance. But I feel that the people need to take the steps to educate themselves. I am sure they have internet, where they could choose to educate themselves in order to educate their children. These families need to instill respect in themselves because I don’t think they respect themselves. Nor do I feel that these families in Puerto Rico love this paradise because someone who truly loves this island do not leave their trash all over the place.

Not all families are this way

Please understand that I don’t speak about all the families in Puerto Rico are this way. Because on the other side of the spectrum, there are families cultivating respect and love as I have met many. Including a wonderful man and his wife with their daughter who came to that beach when I found that garbage. The first thing the man does is ask me if I needed a bag. He then he pops his hood open and takes out a massive bag and proceeds to pick up more garbage that was still all around.

This is what this family is cultivating for their daughter. Moreover, they also feed the strays. at the beach. This family is what Puerto Rico is all about. Those families that still hold on to the tradition of caring. What most of those other families have lost as most families seem lost themselves.

I took 2 of the bags out , which could only fit and he took the rest. I drove down to this large dumpster down the road and threw it in there. Wow, What a concept. But that is a hard thing for most of those families.

When I see things like what that family did by leaving their garbage there, I lost hope. Right there, I could not fathom that they would do such a thing. But when these wonderful souls came, they lit a spark of hope back into me. It was great to see after everything I have seen. This is what the this beautiful island needs more of, because it just seems like there are more people doing bad then good

We left the beach cleaner that day, but there was so much more garbage around. We can’t do it all, but if we all did our part we can change this world. It starts with taking care of our planet instead of cultivating a mindset of wanting to trash our world.

We need to cultivate a different mindset. regain the traditions that you have lost. respect, love, caring. Don’t allow those values to die. breed a different environment. Instead of drinking, smoking cigarettes and partying on front of your kids, read a book instead. Meditate, do yoga, do something other then the never ending cycle that you have conformed to and now call culture. To change this world we are going to need to change ourselves. We must evolve instead of continuing to bury ourselves.

Please let me know if what you think of what I wrote. Do you feel most people need to change this mindset? Do you feel like I am exaggerating ? Please leave comments down below , I would like to hear from you