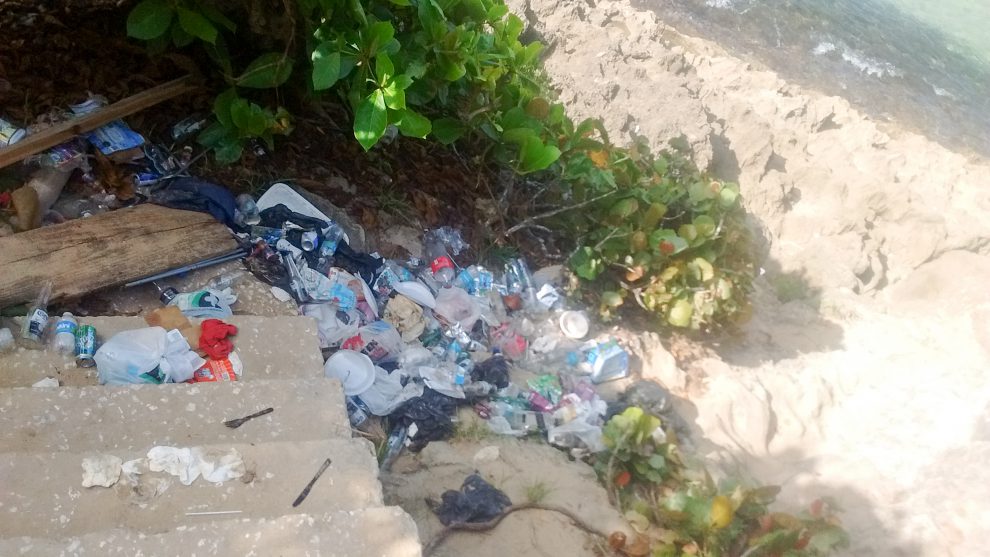 Update: I wrote this in 2016, but the destruction continues today as people continue to treat this and the whole island like a landfill. Here you can read of the continuation of the destruction of this beautiful beach.

This post was written in 2016 before hurricane maria and hurricane maria did cause damage to the entrance to this beach. But the damage that hurricane maria causes is nothing to what the destruction the people do to this and many other beaches and rivers around the beautiful paradise as the people continue to trash the island and treat it like a landfill.

This beach in particular was not well known as it is kind of out of the way where you have to either climb down those rocks below the 4 palms in the center which is the what you will see further in this post or through a path to get there, which was as worse as this one.

But now with the power of social media, people are finding these beautiful gems such as this beach and the adjacent beaches around.

So uh yeah some would say that I complain a lot about the garbage here in Puerto Rico. But when you see this day in and day out in such a beautiful place, why would anyone accept this as normal. 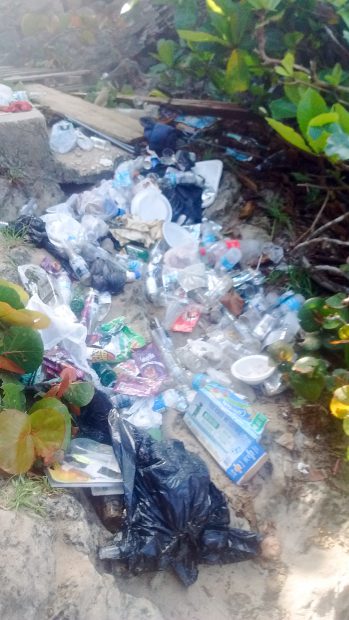 This is the walkway to the beach I was in yesterday, La poza de las mujeres. So people would pass through this like like it was second nature.

DA DA DA nothing to see…. move along.

This went on all the way to the other trail going out. Bottles of beers scattered about, it’s truly sad that this is what we as a “society” have become and again it’s not only here but all around this world. this is humanity’s pattern, it has become our way of life. Worldwide.

We have become numb to it, we have become nothing but a world of consumers. We buy plastic cups just to use them once and throw it to the side when we could use a reusable cup, but washing that cup would be too much work for most as we live in a world of convenience.

We have become disassociated with nature and we continue to live a life filled with stress and where we want to numb that stress away,we want to break out of the shell and so we have become numb to the world.

The primary garbage that I find all over this island is alcohol, beer bottles and cans.  Of course plastic everywhere.  Don’t we ever stop to think of our actions. I wrote a blog on plastic and why we should use less and what we could do to change our consumption of plastic, which could be found here.

There once was a travel documentary in the 50’s called “Welcome to Fiesta Island”. Which can be found on that link.

That is what seems like the people just want. To just party all the time and there is no problem with wanting to have a good time.

But we should be responsible for what we do, we should strive to try to change this world and our bad habits.  We should want to try to better this world instead of engulfing it with our ignorance. 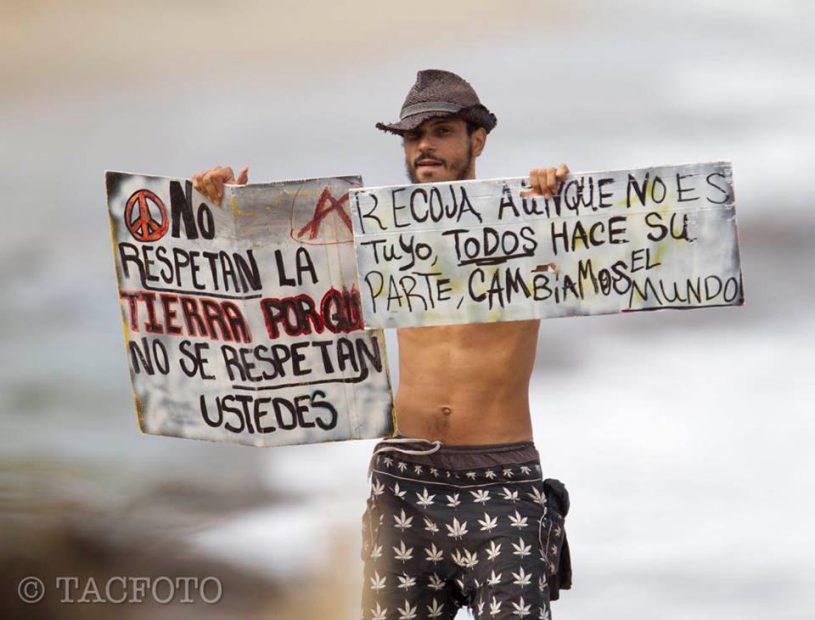 This is what your children inherit from their parents.  This is the cycle we pass on to them, We no longer know the meaning of respect and like one of my signs read, “You don’t respect the earth, because you don’t respect yourselves.” A radical sign, but something that had to be said.

Enjoy the beaches of Puerto Rico 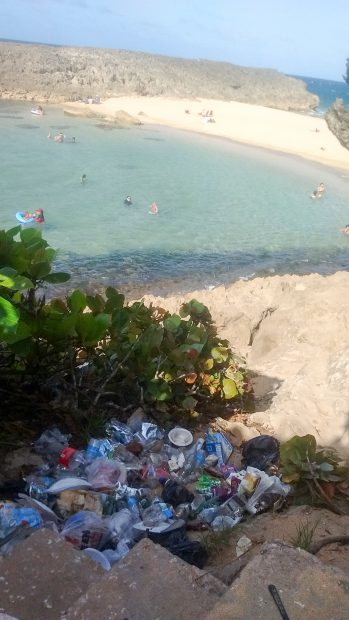 Come enjoy the beaches of Puerto Rico, Just gotta walk over the garbage to get to the beach.

This is what happens in just one day. This the path going down to the beach through the rocks below.

One person throws garbage the next person follow because this world has become nothing but a world of followers.

We allow ourselves to be manipulated by the actions of others. We become that product of this environment. We see that others don’t care and so we start not caring.

When we should not allow the stupidity of others influence our frame of thought.

People want Garbage cans in beaches like this where it would be difficult for someone to come in to pick up their garbage.

But it all goes back again to convenience,   people want others to come pick up after them.

They have this mentality of entitlement. There method of thinking is well if they don’t have a garbage can for us we are just gonna leave it here and that is the kind of mentality we breed and pass on to our children.

It’s just too much work to carry your lighter than you brought it in garbage.

I always say if you want garbage cans and others to come pick up after you then you should pay to enter that beach so that others can come clean up after your entitled buttocks.

It;s that simple, and even more simple than that is you take the garbage that you brought with you back with you.

Most of the people I encounter at this beach come from the metropolitan area, around the capital area of the island, San Juan.

So people come from afar to leave their garbage in this and other beautiful beaches. 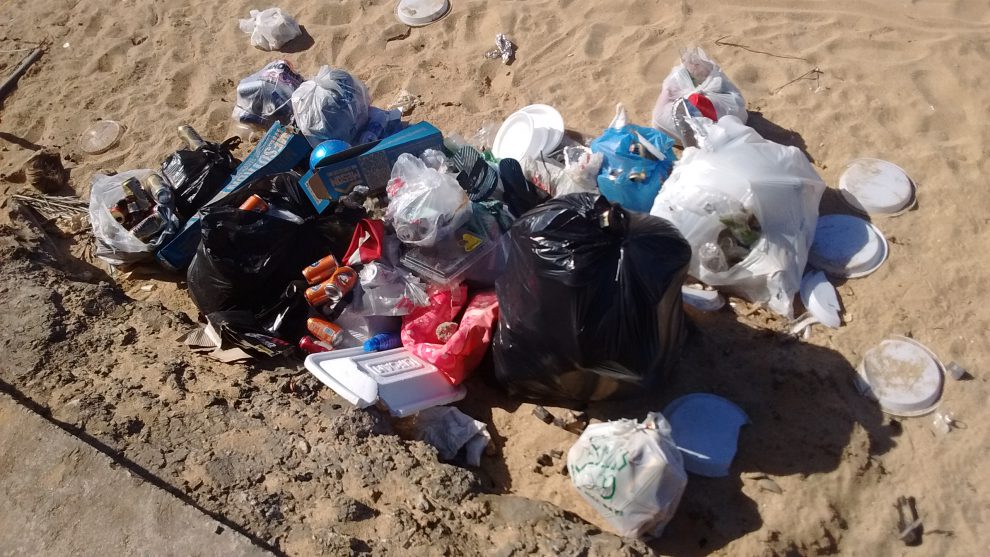 How hard is it to put it back in your precious car, oh no, can’t have garbage in your car.

We are in need of an expansion of consciousness because we live in a world where the people’s consciousness has become numb and sedated.

We and I say we as the world not only Puerto Rico, we need to open our eyes and see what we as a humanity are doing not only to our world, but to the species that call it home and to what we leave our future. 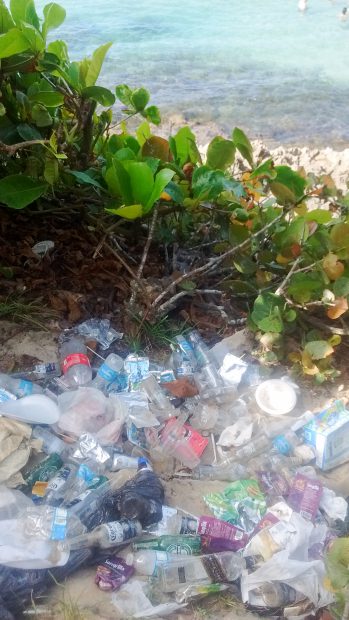 They should not inherit this world. This concrete mentality and environment that we continue to create along with our ignorance.

This is what happens not only in this beach but many beautiful beaches and rivers and along the sides of the road of this beautiful enchanted island.

It’s a widespread infectious disease and we just can’t stop burying our home, it’s species, including our own selves.

It pains me to see such a beautiful island and the rest of this beautiful world be destroyed and allowed to be destroyed by our own ignorance and stubbornness.

The stubbornness to change our ways and instead of leaving nothing but footprints. we leave a path of destruction. 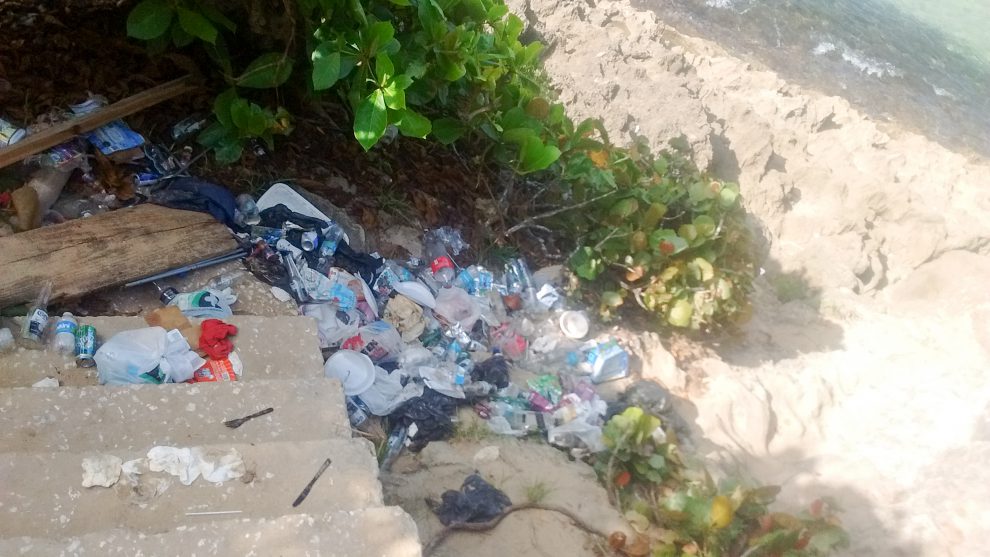 Such a beautiful paradise that we have confined into a hell that we continue to make it.  We took heaven and confined it into hell and we continue to go no where in this world but to our own demise. 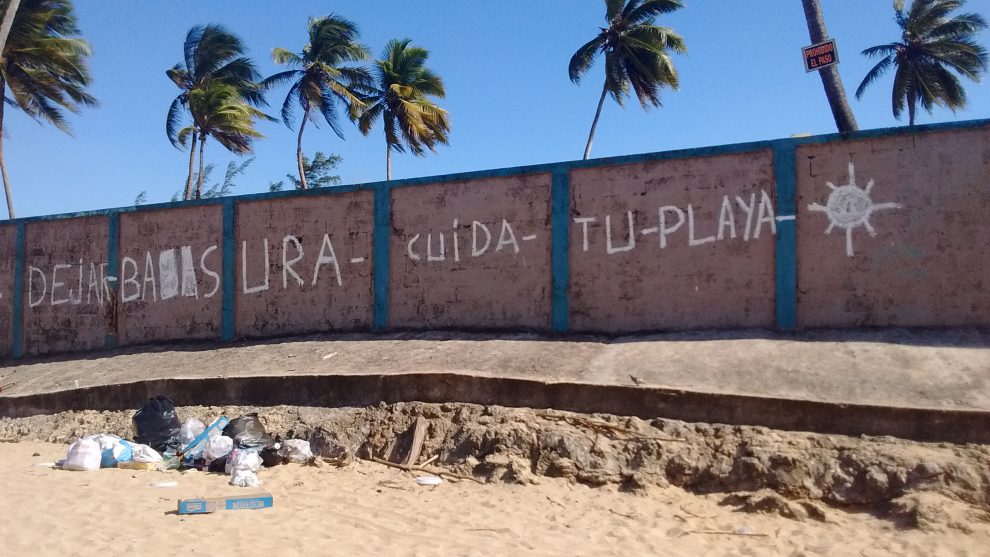 I want to get paint and paint on this giant wall,some of the signs because people need signs in order to remind them what they need to do. But something like what is written in this world won’t suffice in a world to numb, which is why my signs had to be “radical and extreme”.

Well I know most people won’t like what I have to say but it has to be said. The problem of this world is we stay silent about things that matter.

I am not trying to paint this island in a bad way. I just want to bring attention to the problem at hand.

We have to stop the mass consumption again bring your own cups and you can use your cooler as a garbage can the same way your brought it in.

We have to reduce our consumption as best we can.

Let’s wake up, lets change the way we see this world, lets not accept this as normal, we are the change,we can either be the plague or be the cure.

We have to pave a better path for a better future, we should not be handing down our shovels. We should only pass down shovels if we plan to grow food, not garbage!

Here is a video

Please share this post so that others could get the picture, we must protect these beautiful places and truly cherish it.

Do you think this post is justified or do you think I am over reacting and that garbage is not an issue or that there should be garbage cans there for the people to leave.

Please leave any comments, your feedback is appreciated.