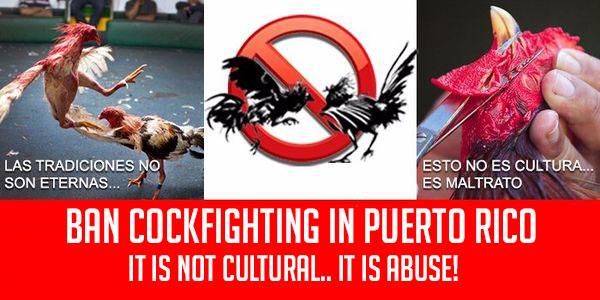 On Wednesday Dec the 12th congress gave final passage to legislation that would shut down legal cockfighting in U.S. territories including Puerto Rico and the U.S. Virgin Islands. Many of the people here in Puerto Rico would argue against the ban citing that it is a cultural tradition. In this Post, I will share why it should be banned and should have been banned a long while ago.

I just have to say, It is about damn time.

Roosters are born, raised, and trained to fight on “game farms.” Breeders (also called “cockers”) kill the birds they deem inferior, keeping only the birds who are “game,” meaning willing to fight. Many of these birds spend most of their lives tethered by one leg near inadequate shelter, such as a plastic barrel or small cage. Breeders “condition” the birds to fight through physical work, including attaching weights or blades to their legs for “practice fights” with other roosters, a process that cockfighters call being “tested with steel.”

Breeders often pluck the birds’ feathers and hack off the roosters’ wattles and/or combs (the flesh at the top of their heads and under their beaks) to prevent other roosters from tearing them off in the ring. Since roosters do not have sweat glands, losing these body parts deprives them of the ability to cool themselves. Some “cockers” cut off the birds’ spurs, which are the natural bony protrusions on the legs, so that more deadly, artificial weapons can be strapped to their legs.

Many of the people here depend on making their livelihood on this cruel “sport”, but no one should make a fortune on the cruelty of another being.

The people say it is part of “culture”..

There are people here on the island argue that it is part of their cultural heritage.

Who in their right mind could defend this as being part of culture? Wasn’t slavery part of  “culture”?

First of all, Just because it  is part your tradition or part of your culture does not necessarily mean right or even acceptable.

I am a person who believes culture should evolve, therefore I think we should strive to remove the negatives of “culture” and focus on the positives and create our own culture instead of following stagnant traditions. Culture to me is a box that we have confined ourselves to.

Which is why there is not much progress in the world because everyone has the same stagnant mindset passed on generation after generation. For instance, Just like fathers teaching their sons how to be a machista or passing on racism from generation to generation because that is their culture.

We should strive to better ourselves, create a culture based on growing instead of a culture where we all stay the same. But I will go on further on culture on a later post.

Cockfighting is barbaric, cruel and violent and unneeded and whom ever supports this has no heart or compassion because we live in a world desensitized by violence.

I am sure since the people that say it is their tradition would take their children to these cockfighting events where exposure to such brutality can promote insensitivity toward animal suffering and enthusiasm for violence.

In a phone interview to the associated press Ashley Byrne, associate director with PETA, said that the bill was long overdue and will help protect animals.

“Money and tradition are never an excuse for cruelty,”

She also stated most people would be appalled to learn that cockfighting is still legal in U.S. territories.

“In a modern society, forcing animals to fight for their lives is cruel,” she said. “Cockfighting is a horrific blood sport.”

If you want to support cruelty, violence and the exploitation of defenseless beings barbarically fighting. Lets instead make a new tradition for you. Let us put your children and grandchildren ages 3-7 to fight until the death.  We could also even stick plastic spurs in their hands and feet and for those that don’t know that is what they stick behind the chickens claws in order to injure the other bird. But let me not give people any ideas, they would surely do it just to continue to profit off the misery of others.

I am sure that if that was part of culture, the people would defend it with their conditioned state of mind.

No? Why not? Too barbaric? Too cruel? It is the Same concept. That is because we place a higher value on human life than an animal which has as much rights to be alive as we do. Therefore The only value most people seem to put on an animal is just for our own consumption and in this case, for their own amusement.

Swallow your pride. Because that is the only reason people defend it.

Cockfighting should have been banned a long time ago because the excuse of it being part of culture and being a revenue machine is irrelevant because many of the people who argue that, are not taking the chickens well being into account because they don’t care about the animals abuse.

Therefore all they care about is keeping tradition alive even when this tradition makes nisense in this day and age. Because NEWSFLASH.. We no longer live in the dark ages. Furthermore we have made so much progress in moving humanity along for this kind of savagery to exist.

In conclusion, For those that argue that thousands of people will lost their “jobs”. Go find something else to make your money off that does not include violence and cruelty. Go do something you can actually be proud of.

For those who are angry that this tradition will finally be banned. Go get angry at something worth being angry about.

I am sure people will stand up and fight for it to remain when they don’t stand up and fight for anything really matters, for what is really important, consequently that is one of the problems of Puerto Rico because people use their voice for things that don’t matter when there are so many issues that they can raise their voice on that does matter.

Do you enjoy cruelty? Would you think it is the right choice to ban this cruel violent “sport”? Do you think animals have no rights? Leave your comments down below