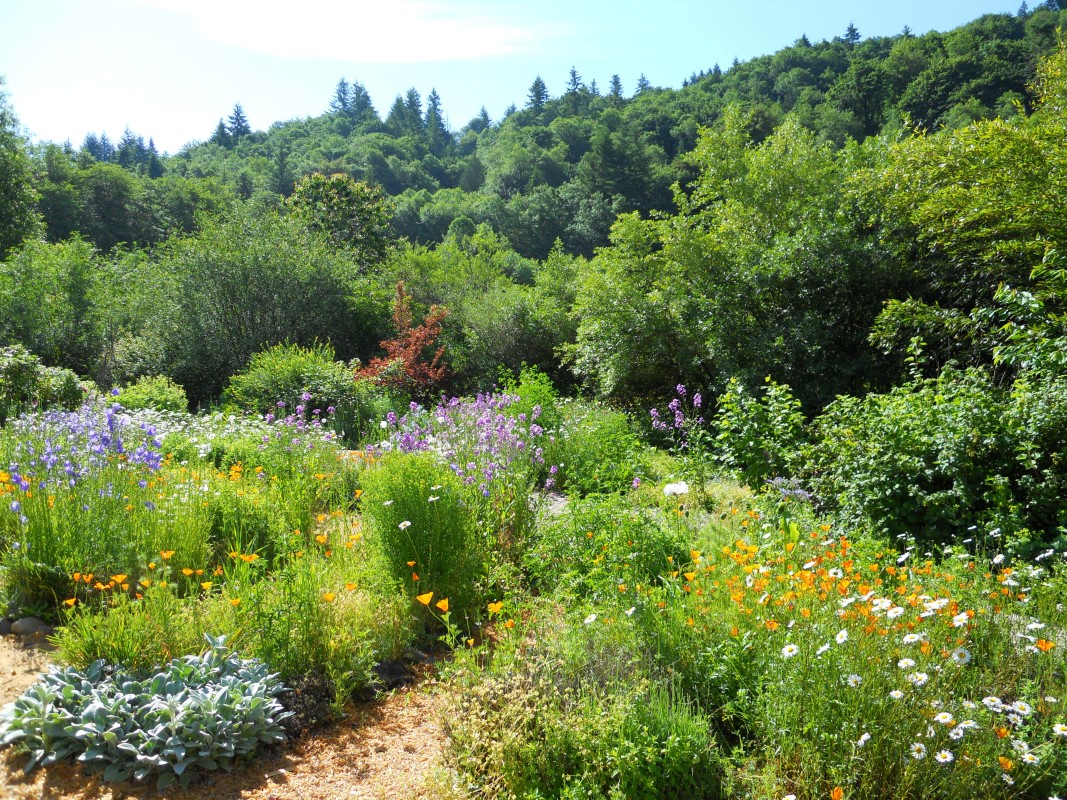 What is a Food Forest…

A food forest, also called a forest garden, is a diverse planting of edible plants that attempts to mimic the ecosystems and patterns found in nature. Food forests are three dimensional designs, with life extending in all directions – up, down, and out.

Generally, we recognize seven layers of a forest garden – the overstory, the understory, the shrub layer, the herbaceous layer, the root layer, the ground cover layer, and the vine layer. Some also like to recognize the mycelial layer, layer eight (mushrooms). Using these layers, we can fit more plants in an area without causing failure due to competition. Forests are ecosystems with a diversity of plants, animals, and fungi. They were designed by nature to have perfect balance. A food forest is a version of this in which the different, balanced components produce food. When we understand how nature creates its ecosystem, we can model that with productive species to produce food sustainably, with minimum inputs for maximum outputs. Forests have layers. At the top is the (1) canopy layer followed by (2) understory trees, (3) bushes and shrubs, and down to (4) herbaceous layers. Under the ground, there are (5) root yields, and at the surface, there are (6) groundcovers. There are also vertical layers of (7) climbers. These layers work to occupy all the space. In designing a food forest, we use those layers to work for our benefit. For designed food forests, the plants change from climate to climate. In the subtropics, tamarillo functions as an understory, and also within this layer are productive trees, such as feijoa, guava, and citrus. Taro, coco yam, and cassava are root yields. There are also large herbs, like bananas. The food forest would also include large support species—ice cream bean, tipuana tipu, casuarina—that support the forest by cycling nutrients, as well as understory support trees, a la acacia, leucaena, cassia, and albizzia. Most of these support species will eventually give way to large, productive species: rose apples, mulberries, jackfruit, bunya pine, pecan, and mango. The system remains very stable when all the layers are occupied. We can plant foods by cultivating the support species at the same time as the fruit trees, then managing the support species to shelter and boost the productive species. Or, we can start just support species, but we shouldn’t start with just the productive species because it would require lots of inputs and hard work to keep them healthy. Support species can be up to 95% of the mass in the early years, and most of them will be nitrogen-fixing species. We speed their life cycle up by managing the support species, pruning when there is more rainfall than evaporation. Over time, less mass will be from support species and more from productive plants until, ultimately, the forest is 95% productive species. This is how we stack in time as well as space. So, we are manipulating the way a forest grows, particularly speeding it up, to work in our favor. We can pollard nitrogen-fixing legumes to allow sun in during rainier times and, then, through regrowth, supply shades in drier times. We can eventually cut these legumes lower and lower to yield their space to productive species. Finally, we can cut them to ground level and remove them altogether. This is how we more rapidly feed the soil with a fallen forest. We can also use animals to help in the process. Larger grazing animals can graze to clear areas until we put in our small plants. Chickens and ducks can come through and prepare the ground. With established trees, chicken and ducks can return to clean the area up and speed the cycle of low-lying plants. We just have to keep an eye on the system and work the animals to a planned improvement in productivity. Food forest work as a living ecosystem, both diverse and stable. The production of soil is constant and fertility constantly growing. The production is nonstop. The system will actually replicate itself over time. This type of garden can make us the most beneficial animal on the planet, all while supplying our own needs.

Here is a wonderful video by Geoff Lawton you can visit his permaculute site by clicking here.